Here is a three-step guide to combine all the data of all the sheets to single sheet. Follow these steps as mention: -
1.  Press ALT + F11 keys, and it opens the Microsoft Visual Basic for Applications window or you can open Microsoft Visual Basic window from developer tab >>Macros (in Code Group) as shown picture. (step by step guide about to add developer tab Click here).

3. Now press F5 key to run this code, and it’s all done. A new worksheet named Combined has been created in which all the data from all the worksheets in the workbook has been merged and this worksheet will add before all worksheets. 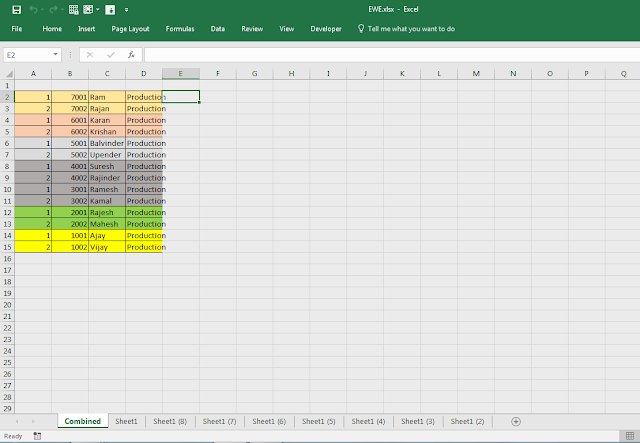 Here is a five-step guide to combine all sheets of different workbooks to a single workbook. Follow these steps as mention: -

1. First of all put all the workbooks that you want to combine into the one folder as shown in screenshot:-

2. Launch an Excel file that you want to combine other workbooks into.

4. Copy the following VBA and Click Insert > Module, and paste the following code in the Module Window and change the path from “C:\Users\ankit\Desktop\EWE” to the path of the folder in which all the files have been moved/copied.


5.  Now press F5 key to run this code, and it’s all done. All of the worksheets (including the blank worksheets) within the workbooks have been merged into the active workbook.

Is this article helpful to you?

Get your copy reserved

Just fill up a simple form to get a free copy of my upcoming E-Book "Be Smart" with Excel.